Behind The Image #8 – Shakespearean Portrait 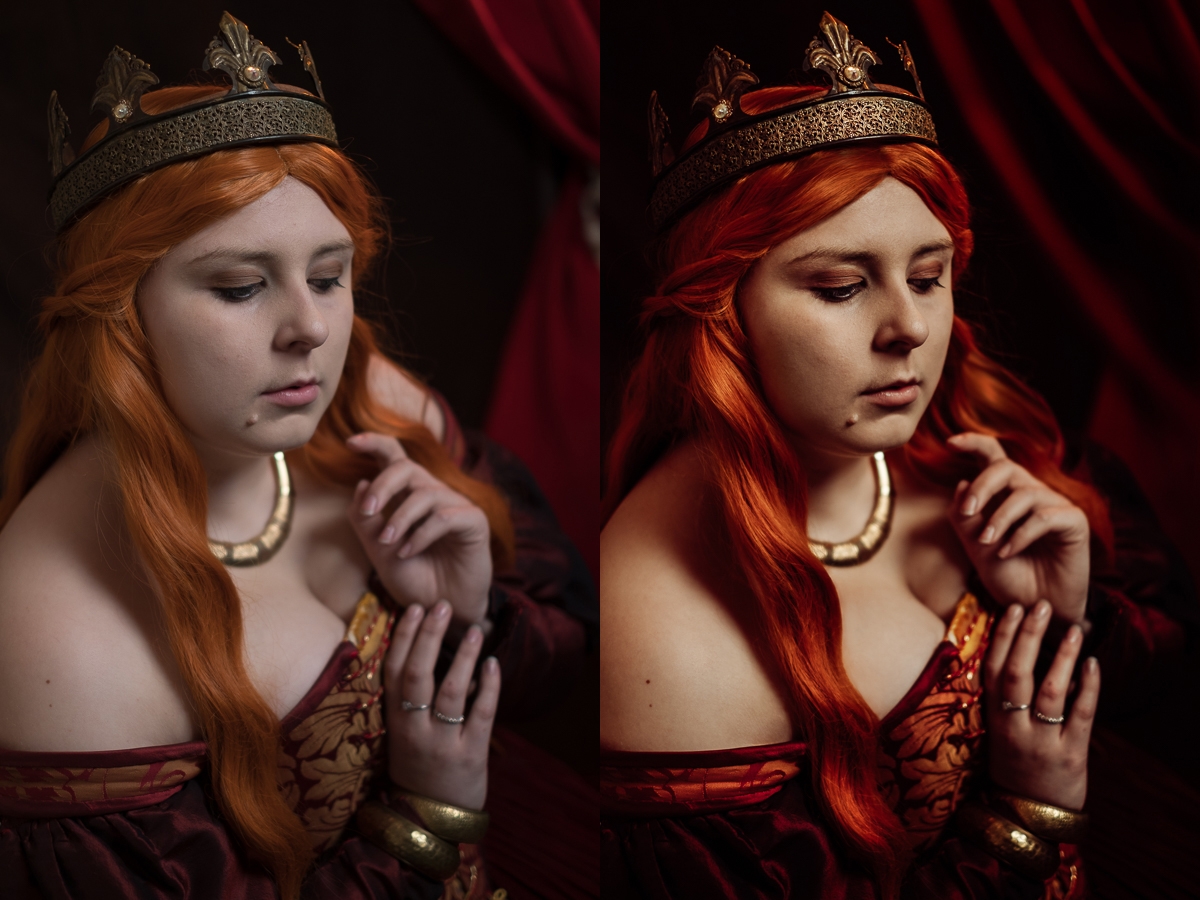 21 Feb Behind The Image #8 – Shakespearean Portrait

It doesn’t seem possible that we’re eight weeks into 2019 already, but here we are almost at the end of February! This week I had the pleasure of heading along to lend a pair of hands on a workshop my friend Neil was running in Banbury giving people the opportunity to photograph the gorgeous Ginger Galore.

Portraits inspired by historical imagery have been my thing for some time now. I guess for me it was a way of using what I’d learned photographing roleplaying events and combining it with my love for studying History of Art. So when I had the opportunity to mess with Neil’s lighting at the end of the workshop I grabbed a few shots.

Just so that we’re clear – this is a post mostly for photographers. 😉

This was shot with a gridded softbox up high on the right hand side of the image and a flash raked across the background. Because I’m short I got ginger down on the floor and stood over her to shoot the image. The low power of flashguns meant that I could open my 35mm (50mm equiv) lens up all the way to f1.4 and get a lovely shallow depth of field. The shallow depth of field means that the hands, background, and dress are thrown slightly out of focus, concentrating the viewers attention on the subject’s face.

And talking about dresses – this dress was beautiful. The dress and crown was sourced from the hire department at the Royal Shakespeare Company. I’m already making plans to revisit my old glamour work with male models with some historical costumes – it’s quite affordable

Partially I wanted to share the unretouched version of this image just to show you how good Ginger’s skin is… but also because I want to share the kind of work that I do as standard on a portrait like this.

The first thing I do is import the images into Adobe Lightroom. I sort out the images that I like, and I mark up the ones I’m going to work on (in this case it was very easy – I only shot five and I knew the one I wanted to use as soon as I’d shot it). The I colour grade the image. Colour grading is about making stylistic choices about the colours, tones, contrast, etc. in an image. It’s about bringing out the mood and fulfilling a creative vision. In this instance I warmed everything up and also tinted the skin slightly sepia as I have done previously with historical portraits I’ve shot.

After colour grading the image I import into Adobe Photoshop, taking with me the colour settings from Lightroom. At this point I do any liquifying of the image (basically airbrushing) – I’ve barely done any here, just a fraction on the hand and jaw to tidy the lines up. I absolutely refuse to make serious surgical adjustments to my images. I’d rather source a model who looks like matches the concept than change their body shape in post-processing.

At this stage I also cut and pasted some sections of the hair – one to cover up the bare shoulder at the back, and the other to neaten up the fringe which was looking slightly dishevelled after two hours of being photographed! I also copied and pasted the curtain a few times to fill in the backdrop and make it more interesting.

Next I retouched the skin and hair. I used a combination of frequency separation and just plain old clone tool / patch / healing brush. There wasn’t much to do really, but everyone has a few imperfections that we don’t notice when we look at them in person. Photographs can highlight these imperfections and draw attention to them so I generally just get rid of them.

Lastly i created non-destructive dodge and burn layers (50% grey filled layers set to Overlay mode). I use this to bring life to the image by creating areas of highlight and shadow that focus the eye on different areas. For instance the dodging and burning of the hair makes it look more sumptuous and luxurious, and the work on the crown brings it forward in the image, making it more noticeable. Plus who doesn’t love a bit of extra shadow under the cheekbones?

What I’d Do Differently

Every time I shoot a portrait that doesn’t have the subject looking at the camera I wonder if it was the right thing to do. Especially when it comes to women because I worry that perhaps I’ve made them appear demure and submissive rather than the powerful and strong woman that I wanted to depict.

But here I think it works. I see an intimate portrait of a young queen wearing an old family crown. It’s not as direct and forcefully assertive as some of my other historical portraits, but I like it nonetheless.